A wildlife rescue organization in Chattanooga received a call last week from a Soddy Daisy woman who spotted what she believed to be a silver fox pawing at her back door trying to get in.

“Obviously that’s not normal for a fox,” said Juniper Russo, executive director of the group known as “For Fox Sake.”

Russo said the animal — a non-native arctic fox — was likely acquired as a pet by someone in the area.

The fox, which rehabilitators named Cooper, didn’t have a microchip, so Russo posted photos of the fox to social media to see if she could track down its rightful owner.

The mail eventually reached Cooper’s most recent owner, who said the fox was acquired from a friend who neglected the animal.

Cooper’s temporary keeper had built an enclosure out of chicken wire to use as a temporary home for the fox, which escaped and made his way to the neighbor’s yard, who contacted For Fox Sake.

The temporary keeper agreed with Russo that moving Cooper to a sanctuary was in the fox’s best interest, and Russo was able to find a long-term home for Cooper at Exotic Pet Wonderland, a wildlife facility in Knoxville.

“We work quite closely together because we get calls about exotic pets quite often, and there’s a lot of overlap between what we both do,” Russo said over the phone from Exotic Pet Wonderland. 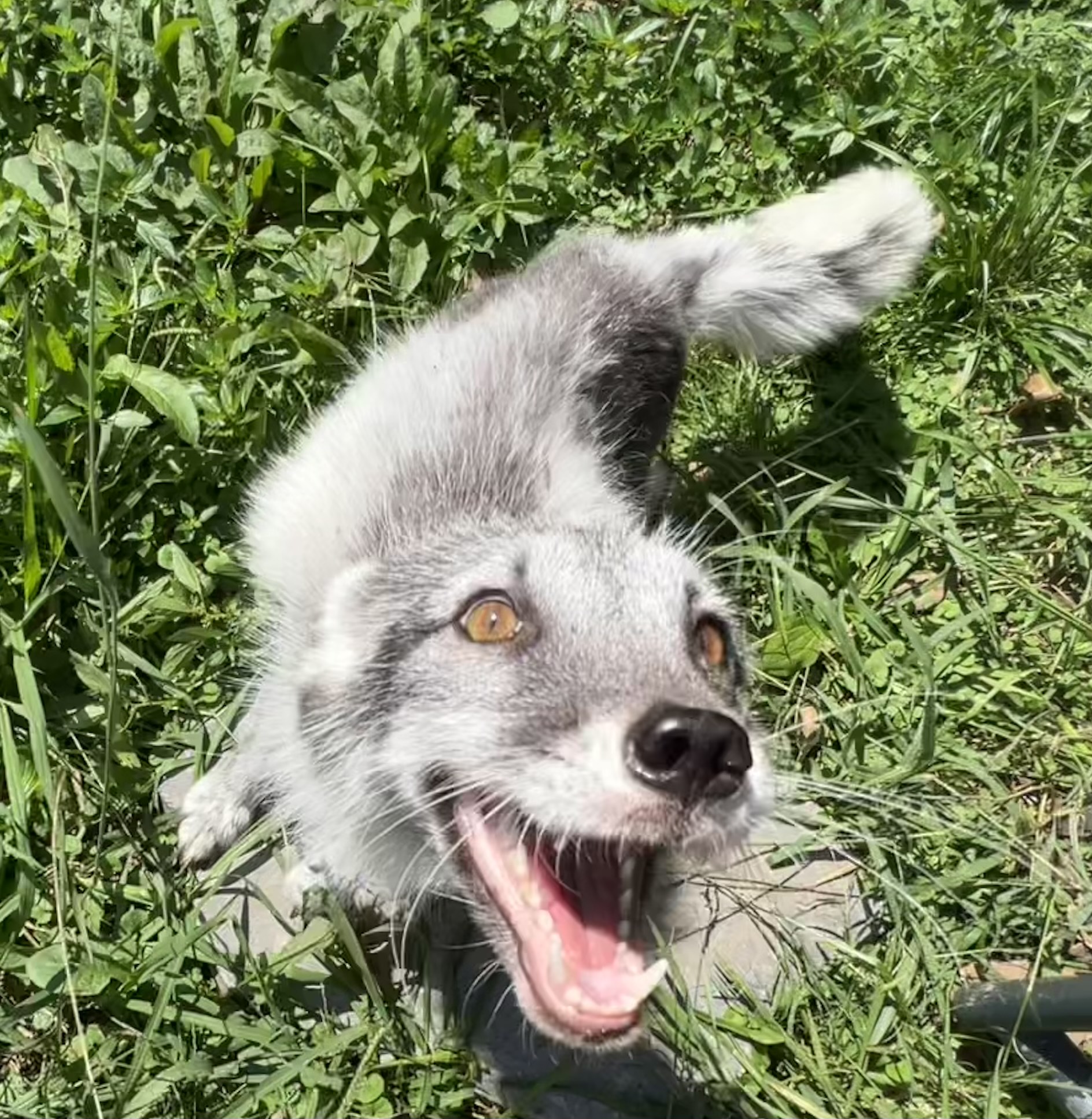 Contributed photo by Juniper Russo/Cooper, an arctic fox found outside its enclosure in Soddy-Daisy last week has a new home at Exotic Pet Wonderland in Knoxville, Tennessee.

Captive bred wild animals – even if native to the area – cannot be legally rehabilitated and released into the wild in Tennessee. As a result, Russo often turns to Exotic Pet Wonderland when she’s looking for long-term homes for captive-bred wild animals, she said.

It’s not uncommon for people who buy a fox as a pet to later decide they don’t have the skills to care for the animal, and Exotic Pet Wonderland founder Linsey Hembree said that in a phone interview she took on seven such foxes as private owners before starting the sanctuary in 2019.

“The need was too great to just do it as an individual,” said Hembree, who now has more than 30 foxes at the sanctuary. “More and more people are getting these animals every year, and most of the time they don’t know what they’re doing with them. Every year more and more are abandoned.”

Russo said For Fox Sake also gets about 30 calls a year from people who “kidnapped” wild baby foxes to keep as pets before realizing foxes are harder to care for than they thought.

Animals that have not been bred in captivity can continue to live at For Fox Sake and serve as breeders, be taken to a zoo, or be rehabilitated and released into the wild when they are very young, she said.

Most of the foxes at Exotic Pet Wonderland are arctic foxes, which Hembree says are legal to possess without a permit in Tennessee. She said native species, including red and gray foxes, require a permit, and the permit is easy to obtain.

She said she is working with officials at the Tennessee Wildlife Resources Agency to find ways to reduce the growing number of pet foxes that need new homes once their owners realize they lack the necessary resources to care for them To take care of.

“We’ve always said that almost all the foxes that people buy in the spring when they’re born, they won’t see their owner the next spring,” Hembree said, adding the average age of the foxes that live in the sanctuary after delivery by their owners is 212 days. “It’s a huge growing problem for an animal that is much more difficult to care for than just a dog or cat or even a smaller exotic animal. There’s a lot that goes into their care.”

Russo said what overwhelms most fox owners is the animals’ scent.

“Both arctic foxes and red foxes stink to high heaven, and there’s no way to deodorize them,” she said.

“When kept indoors, they tend to mark pretty much anything they think is theirs, including their owner’s bed and carpet,” she said.

Foxes can become more aggressive when they reach puberty and are often not as cuddly as their owners would like, Russo said.

“It’s through no fault of your own,” she said. “It’s just that this is a wild animal that isn’t really equipped to live in a human home and be treated like a cat or a dog.”

Both For Fox Sake and Exotic Pet Wonderland are non-profit organizations. Visit forfoxsakewildlife.com or exoticpewonderland.org for more information.