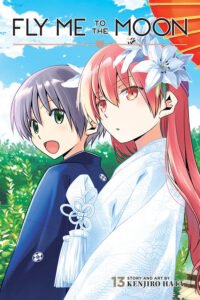 We ended in Volume 12 with the Nasa class “Princess” and a mystery surrounding her. This volume begins with the folklore of Kaguya and the moon, and it turns out that our “princess” is actually called Kaguya. Nasa also has a strange dream in which he has gone way back in time where he is some kind of emperor and Tsukasa is with him as some kind of messenger or servant. After he wakes up, we can spend some time with Kaguya.

Afterwards, students from Nasa’s class visit him after learning that he lives in a bathhouse. Here they meet Tsukasa and then indulge in the services of the bathhouse before deciding to just randomly walk away and get some ramen. Tsukasa compared them to a wild bunch, but I prefer to call a group of teenage girls a walking tornado.

The same group of students want to do something for their film club. they talk about The Blair Witch Project and how a $60,000 budget turned into millions at the box office. This inspires her to make a movie in a haunted house, but no teacher wanted to accompany her. So it’s up to Nasa to do the deed, and he ends up dragging Tsukasa and Aya with him. Aya ends up starring in the film, but something isn’t right when Kaguya keeps a close eye on Tsukasa!

The biggest spotlight here was Kaguya. The way she speaks and acts strongly suggests she’s out of this world, and with Kenjiro Hata delving into folklore and weird lucid dreams, I feel like this series is becoming move away from the slice-of-life towards science fiction. Whether or not this is all deception remains to be seen, but if there’s going to be a change of direction and genre then Kaguya is clearly the key to all of this. She’s incredibly smart, can solve almost any problem, fix any broken object, and despite the fact that her room is a total mess, she knows exactly where everything is. In short, she’s a genius and maybe even smarter than Nasa.

That in and of itself makes you wonder about Nasa. I mean he survived being isekai, was truck-kun and also has supernatural intelligence. They also referred to the meaning behind Nasa’s name, the stars and the American space agency. What is that Nasa is a real emperor who lost his memories and Tsukasa was his love at that time? What if Kaguya is the “princess”, aka… the daughter of Nasa and Tsukasa? That would be one hell of a plot twist that would be so out of place in a story so established, but… it kind of feels like it is.

After all, we still don’t know Tsukasa’s true past and she’s still pretty secretive. Even when they introduced the whole Moonrock story at the very beginning, it almost felt like they were preparing for a twist like this, so it kind of makes sense and kind of doesn’t at the same time.

In every review of this series, I’ve said that this was my bi-monthly dose of cuteness, but I can’t say that this time because while there were your trademark cute moments, this volume felt a lot different than the regular fare we’ve known . They delved into folklore, sci-fi, and even lucid dreaming to grow some of the subtle seeds that were planted in an effort to achieve what I can assume is a genre shift for the series.

Sorry to read my Vol 12 review because I’m kind of repeating myself here, but genre shifts that deep into a series are highly questionable. I referenced 7th Garden when I was doing this around Volume 7 or 8 and it was so harrowing that it completely shattered my expectations and enjoyment of the series. Here, at least, it seems like the clues were there all along and we’re slowly getting in, but we’ve all come to know and love Tonikaku Kawaii as a real-life romantic comedy. The cuteness between Nasa and Tsukasa gets a bit dated from time to time, but switching genres to spice it up is pretty extreme.

I really hope this is all deception and that it’s just symbolic in some way. While it adds mystery and intrigue to the story, given the story and tone of this series so far, it would work best to keep it symbolic and then pass off this whole situation as a “haha, do you have” style gag. I think we need to read on and find out, but I hope and pray my worries are for nothing.

You can also check out other The Outerhaven reviews on your favorite social networks:

This article was provided for review by VIZ Media.