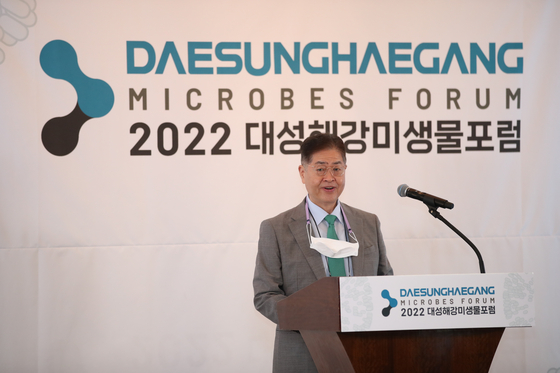 Quantum biology, while still in its infancy, could be a game changer in a variety of sectors from bioengineering to sustainable energy, scientists say.

The annual Daesung Haegan Microbes Forum 2022, hosted by Daesung Group, was held Tuesday at the Westin Josun Hotel in central Seoul. In its fifth year, this year’s event was held under the motto “What is life? The Quantum — A new frontier in biotechnology” with a focus on quantum biology and its potential applications.

“The issues of quantum biology and quantum mechanics are profound in nature and complex to unravel,” said Younghoon David Kim, Chairman of the Daesung Group and Honorary Chairman of the World Energy Council, in an opening address for the event. “However, over the past 10 to 15 years, these topics have gradually developed into trending topics.

“And perhaps more than ever we are closer to understanding the tremendous potential they offer, not only in theory but also in practical application,” said Kim.

Quantum biology is an emerging field, particularly in Korea, but recent developments offer new insights into many unsolved problems, said Kim Young-chan, professor of quantum biology at the University of Surrey in England.

“We are given the opportunity to solve major challenges currently facing humanity – such as the development of sustainable energy – through the use of next-generation quantum technology,” said Kim.

For example, the idea of ​​quantum coherence unraveled the process of plant photosynthesis, which had not been adequately explained in classical physics. Such insights could help to develop a new energy system or a new method of food production based on the principle of photosynthesis in the future.

As the field gains traction, more than 1,000 quantum biology thesis papers are expected to be published this year, according to Kim.

“The fact that this forum is happening and people are really interested in quantum biology means we have our eyes open,” said Jonathan R. Woodward, professor of quantum biology at the University of Tokyo.

“Scientists are searching and believing and have faith in the existence of these quantum mechanical effects,” Woodward pointed out, adding that emerging ideas in quantum biology “will drive really exciting new science and transformative technology.”

“Last year, the Ministry of Science and our Directorate of National Strategic Research and Development [research and development] Programs have identified quantum computing and synthetic biology as key areas in securing Korea’s technological sovereignty,” said Oh Min-kyu, project manager at the National Research Foundation of Korea, in a speech.

Quantum biology is “the common denominator of the two fields” that could bring explosive change to the world, Oh explained.

Quantum computing and synthetic biology “are going to change the world significantly in 10 to 20 years, and we can’t anticipate the magnitude of that change at that point,” Oh said. “An innovative shift may be coming, similar to what Internet technology has led to.”

Speakers at the forum included Hyeon Taeg-hwan, professor in the School of Chemical and Biological Engineering at Seoul National University (SNU), and Jeong Hyun-seok, also a physics professor at SNU.