Talk about generational differences in the workplace. Except in this case, the employee hadn’t even gotten the job yet.

Design agency owner Jeffrey Koh complained on Facebook Thursday (September 15) about an interviewee he was supposed to meet about her internship.

He wrote, “Call me a boomer but I seriously think our future sucks.”

Koh went on to share how he “took the time” to interview the student the next day, even though she knew she left her first company after one day.

However, Koh noted that 19 minutes after agreeing to the interview, she left him a message asking if it was “possible to have a virtual meeting instead.”

He added, “Without giving a reason, she probably figured a virtual meeting would work well, too.”

A screenshot of their text conversation showed Koh responding five minutes after her request, “Don’t think so. It’s ok if you don’t want to come down.”

In the end, he broke off the interview completely three minutes later. “On further reflection, I think let’s cut the interview short. All the best”.

Explaining his actions, Koh shared in his Facebook post, “Sarah is the reason why I totally welcome foreigners who are hungry and hardworking to work here. Screw all these rules and laws that protect eligible Singaporeans.”

But not everyone agreed with his position.

Many wondered – what’s wrong with simply asking for an online interview? Especially in a world hit by the Covid-19 pandemic.

“She politely asked for a virtual interview. You should at least explain to her that you are only speaking face to face rather than shaming her online and she should explain why she needs to do this [it] virtual. Boss, you’re already wrong about this part,” wrote one commenter.

Others criticized Koh for being “petty” and responding unprofessionally, urging him to move with the times. 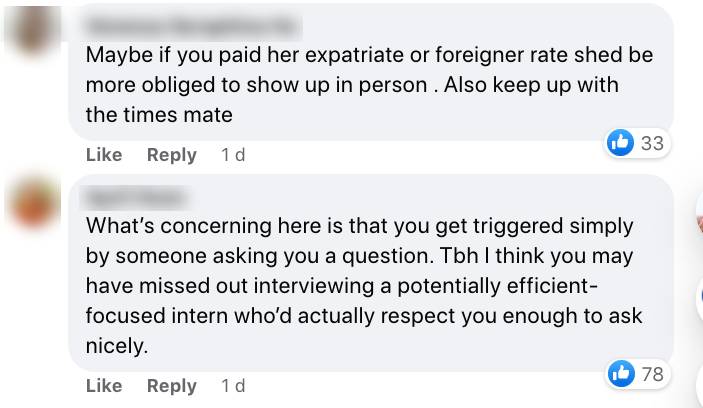 However, some said it was a good thing the interview didn’t take place.

“Thanks for helping her dodge a bullet there. That bullet is you,” one wrote.

Responding to comments that Koh overreacted and assumed the worst of the interviewee:

“If I’d jumped to conclusions like some geniuses say, why waste my time asking her out in the first place?”

“Not just a Sarah, but a whole generation or two”: Koh

When contacted by AsiaOne, Koh, 49, explained that he wanted to meet interviewees in person so he could assess them “on nuance and body language.”

He provided some background on the incident, adding that the potential intern emailed him “sometime in June” about her official internship period, which began on September 12.

Also Read :  Three roads diverge in a galaxy’s future, and the chosen one is almost entirely random!

“I replied a week or two later but didn’t get a reply. So I figured she’s either not thrilled or maybe she’s found another company.”

However, on Thursday he received another email from her asking if they were still taking interns.

“I found it puzzling and called her in the evening. She said the internship company has some legal issues and she finds the culture toxic and not for her. I said, ‘Hm, after a day’?

“Nevertheless, I asked her if she would like to come over for a chat on Friday. She said yes and I told her I would text her my address and ‘boomz’.”

The head of the design agency shared that in the 21 years he’s run his company, he’s seen his “fair share of interns” and that this isn’t an isolated case.

He blamed the pandemic for how many of them are now “absolutely clueless when it comes to soft and hard skills.”

“I’ve spoken to lecturers and friends and I think it’s the result of Covid where everything is at home.”

Koh claimed that even after the online uproar over his comments, his views on the matter haven’t changed.

“It’s about being professional. Being hungry when you get the chance and appreciating how lucky they are when the schools and faculty help them,” Koh said.

“It’s sad and frustrating because it’s not just one Sarah, it’s a whole generation or two.”

He added, “That’s why I refuse to hide the post before the sh*** hits the fan, despite the advice of some friendly strangers.”

Koh has also found support in some camps, with several sharing similar sentiments.

One commenter explained that the prospective employee declined the first interview three hours in advance and didn’t even show up for the second.

Differences in perspective between so-called “boomer” bosses and young jobseekers or employees have recently come under scrutiny on social media.

Her claims sparked debate on social media, with many calling her thoughts “old-fashioned” and “boomers.”

A Singaporean business owner was similarly denounced two years ago after candidly asking, “Are we raising our generation to be grown babies?”

He shared how of the 12 local college-educated job seekers he interviewed over the past week, “none of them [were] hungry for work”.