The natural history genre has become a densely populated field, which makes it all the more important that new series are launched with a truly distinctive character.

Bill Markham, showrunner of the upcoming Awesome/Naturalsays that was a priority for Plimsoll Productions, National Geographic and Earthship during production of the upcoming project, which uses cutting-edge cinematic technology to explore animal powers and senses that transcend human perception and were previously impossible with such detail and depth to hold on the screen.

“The sweet spot is great behavior, great technology and great VFX. National Geographic really pushed us to do something different with this series: enter this world, immerse yourself in this parallel universe,” says Markham. “It’s the trend of immersing yourself in the animals, and then we were able to push it a little bit further.”

Produced by Plimsoll and Earthship Productions and presented by National Geographic, Awesome/Natural Premieres Wednesday (September 21) on Disney+. Oscar-nominated actor Benedict Cumberbatch serves as the narrator, while Oscar-winning filmmaker James Cameron is producing the series, along with Earthship’s Maria Wilhelm and Martha Holmes and Plimsoll’s Tom Hugh-Jones. Markham is serving as showrunner with Matt Brandon.

The seed of the idea for the series came from National Geographic’s desire to explore strange communications in the natural world, inspired by research into trees that “talk” to one another through their roots. Plimsoll took on the project (and the challenge), further refining the concept and eventually focusing on the theme of animal senses and powers that exist beyond normal human perception.

Each episode of the series covers a different theme – from migration to reproduction to the relationship between predators and prey – and then offers a series of five-minute stories that illustrate the theme. Markham says that from a storytelling perspective, the challenge was distilling the detailed data from academic papers and research into clear, concise, and engaging short narratives. “You have to boil it down to what’s really important about this story — you don’t have to say everything,” he says.

Markham adds that on the technological front, meanwhile “What this series does, which is a bit different from the other stuff here at Plimsoll, is the VFX element. We’re really pushing what technology we can use to best uncover this story.”

before Awesome/Natural‘s premiere, Markham sat down with real screen to discuss the new series.

Also Read :  Sussex wildlife charity is ‘angry and concerned’ about the Government’s latest attack on nature

How did you know this project would be a good fit for Plimsoll?

Markham: Traditional natural history programs do very well, but they exist [many] People who do such things very well. We’re interested in pushing the boundaries a little, doing something a little different, bringing something different into it. We want to bring natural history to a wide audience, including family audiences. National Geographic is part of the Disney family and such a trip around the world on the Disney platform is a great opportunity because you can tell these amazing stories, some of which are quite complicated, to a very wide audience.

To do that you have to use contemporary storytelling, you have to use amazing imagery, you have to have exciting new stories – because honestly, many stories have been told about lions, elephants and the rest. But if we could find new ways to tell these stories, that would be exciting.

Up to this point, natural history is a crowded genre on non-fiction television. What is the concept or content of this series that makes it stand out from the crowd?

Markham: There are three things that came together to create this series. One of them is these amazing stories that we find: a lot of it is new science – unusual animals or even known animals doing unknown or unusual things. One of them is film technology, which is constantly evolving. We were able to use an arsenal of tools to tell the stories in an immersive way: get close to the animals, see things in the dark, see things on different wavelengths.

And then the third element was the idea of ​​using VFX in post-production to bring some of those stories to life – not just to talk about it, but to be able to see She. We created this parallel universe to be all around us where we can see what the animals are reacting to and how they are communicating in a way we couldn’t before.

The idea was that we present this world where animals operate, where you only see some of the things through fairly traditional camera and lens technology, but you also see some other things that you can’t see through cameras, like scent trails or pheromones.

Basically, by combining film technology, VFX, and really good research and storytelling, we wanted to create something different than what we’ve done before. And I don’t think there are any such programs at the moment.

What were some of the most innovative film technologies used for this series? 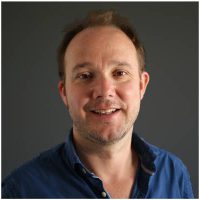 Markham (picture left): You can really break it down into different parts of the kit.

There’s low-light technology — which can film in color by moonlight, which is a relatively recent innovation in the last four years or so — to be able to see what animals are doing in the dark. We had a scene with a hyena [about] like it’s basically playing lions so it can steal a lion’s food [at] Night. We couldn’t have filmed [this] before, because if we had shined a light on those hyenas, they would have run away.

[Next], there are high-speed cameras. We can film up to 1,000 frames per second and usually watch TV [series] are [shot in] about 25 frames per second. We have a scene with a bird called Manakin, a tiny little bird in the jungles of Central America that sets up a sort of dance floor where the male shows off to the female. It’s preparing that area, it’s clearing away all the leaves, it’s got these dancing poles that it’s jumping between, and it’s making these incredible gun-like noises. But it doesn’t move its beak, so what’s up? Well, it actually snaps its wings together – it makes a whole series of vocalizations that you hold with its wings, and it’s only by slowing it down many, many times that you can actually see that and understand what’s going on.

[Then], if you’re filming things at different wavelengths, you’ll need different lenses because glass basically blocks out UV rays. We told a story about flying squirrels that glow in the dark. The moon has more UV than the sun, and in a snowy forest at night, that UV bounces off the forest floor onto the pale belly of the flying squirrel— [which] effectively glows pink when viewed through UV-sensitive lenses – so they can stay in contact with each other in the dark… We can’t see it, their predators can’t see it, but their eyes are particularly sensitive in that part of the spectrum, like our cameras. Our cameras mimic their biology.

They also use ultrasonic calls outside of our hearing range to keep in touch with each other. And of course when you record that, it’s weird that you can’t really hear it; [but] When you get home later, you can look at the wavelengths on a computer and play them back more slowly. If you just put it on the TV in its natural state, no viewer would hear it either.

What kind of technology did you use to get a closer look at the animals you filmed?

Markham: There are these new programs that allow you to get very close to the action, get a fairly wide field of view and decent depth of field in the field. We found a fantastic story involving these vampire jumping spiders that live in East Africa. No one has ever filmed them before: they’re only the size of a grain of rice, and they have this incredible story, which is that the males have to have that very specific perfume to attract the females[:] they must smell human blood. But these grain-sized spiders aren’t big enough to catch up to a human and pierce his skin, So what they do is the males go and catch a bunch of mosquitoes that have eaten on humans, they take the human blood on board and produce this perfume. So this is indirect vampirism.

we [also] uses many remote cameras. We have a fairly well-known animal, the brown bear, [which is] usually filmed outdoors where you can [use] a long lens. But if you want to film them in the woods, where they spend most of their time, you can’t really follow them on foot – you can’t really film them with long lenses.

So we found very cool remote controlled cameras that we could put in certain positions and sort of spy on their private lives. We tell this story about how this community of bears, all males, use this special rubbing tree to leave their scent. And then a woman used the same tree and she left her scent. Then the male bears can follow her wherever they need to mate by the smell they leave behind (which we show).

Using VFX we were able to explain this story beautifully in a way that you haven’t really seen before and therefore don’t fully understand.