The author is a broadcaster, violinist, and author of Year of Wonder: Classical Music for Every Day.

How many of the millions of mourning Queen Elizabeth II could say with certainty who she was, what she was thinking, or what she really liked? She left us a few clues: the horses, the corgis, the midday Dubonnet, the unprepared private giggle at an official function. But one of the most notable qualities of the Queen’s 70-year reign was her utter inscrutability. She rarely let her guard down.

In the field of music, however, we have a certain idea. While others in the royal family, past and present, have shown an interest in progressive musical directions, Queen Elizabeth favored convention. She has been a dutiful patron of many musical institutions, orchestras and conservatories, choral societies and concert halls across the country. And she seemed to be a true believer in the people behind the music, whether they were nervous school kids, passionate amateurs who screamed their hearts out, or seasoned professionals.

Famed British composer Benjamin Britten was touched by her care after heart surgery and a stroke nearly ended his career; For her part, she reportedly preferred his version of “God Save the Queen” over all other arrangements. The list of other major composers she has been associated with – Edward Elgar, Ralph Vaughan Williams, Arnold Bax, William Walton, Herbert Howells, Malcolm Arnold, to name a few – reads like one who is who of British music luminaries of the 20th century. But her own taste was less Gloriana and more every woman. While the Queen was not a guest Desert Island Discs (actually a pity), we occasionally had auditory insights into her inner workings.

Despite all the heightened pomp and circumstance she had to endure every day, the Queen had one note in common

She loved her piano lessons as a girl from her sister Princess Margaret. She loved the British folk music of a country show or a Scottish cèilidh reel. She loved her bagpiper, who woke her up most mornings. As a former member of the royal household told me, “She loved the music, which people actually knew.” Despite all the heightened pomp and circumstance she had to endure every day, the Queen had a common note.

And so although protocol means songs like Vera Lynn or Fred Astaire or numbers from their favorite musicals (such as show boat, Oklahoma! and Annie, get your gun) could not possibly have been performed at her state funeral, many of her other favorite plays are celebrated. And not just in the historical pomp of a monarch’s demise, but also in the carefully chosen fanfares with their military touch; or the references to their Scottish roots; or the familiar chords of Hubert Parry’s “My Soul, There is a Country”; or the ebullient Crimond congregational anthem ‘The Lord’s My Shepherd’ which is sure to raise the Abbey roof.

Queen Elizabeth was a mystery to us. Music is – despite the best attempts at explanation by many – just as unfathomable. In a way, it’s just physics, or “sounding air,” as composer Ferruccio Busoni put it. But within these physical attributes there are indescribable qualities that can be binding and omnipotent in momentous moments. In these notes somehow history and geography, space and time, sadness and joy, sadness and wonder, nostalgia and memory have collapsed. 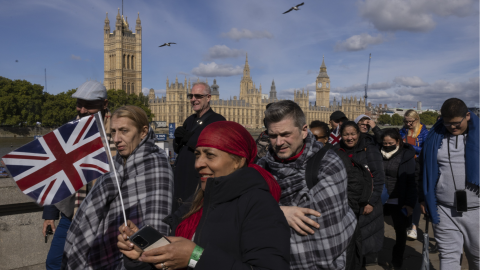 Just as Westminster Abbey must live up to the standards as a space for all of our modern humans, so the soundtrack to this moment in history must offer contemplation and space for all of us. Music invigorates ears and body, head and heart; I know of no more powerful means of belonging. Even in these lonely, divisive times, it can bring us something like gratitude, if only temporarily. Something like hope.

It is of course a great responsibility to provide these otherwise unspeakable things to so many millions around the world. But Queen Elizabeth tried, and was largely successful in her efforts. As I celebrate her reign today, I believe the music is up to the task.